Australia is seen as a perfect testing ground for innovation in clean energy.
By James Thornhill, Bloomberg 4 Jun 2020  13:18 Three years after Elon Musk took up a challenge to solve Australian power outages by building the world’s biggest battery, a Siemens AG venture wants to install even larger ones to bolster renewable investment in the nation.

Fluence, a partnership between Germany’s Siemens and Arlington, Virginia-based AES Corp., is proposing to build two giant lithium-ion batteries at strategic points on the transmission grid to allow better access for clusters of wind and solar plants. It says it can have the units up and running within 18 months, much quicker than building out transmission infrastructure to accommodate more renewables.

Australia is seen as a perfect testing ground for innovation in clean energy, as a developed market with plenty of space to benefit from its abundant sunshine and wind. There’s also a need for new capacity with the expected retirement of several aging coal-fired plants over the next decade. However, regional grid bottlenecks and a lack of clear central policy saw investment in the sector drop by 38% last year, according to BloombergNEF, following strong growth in the prior two years. 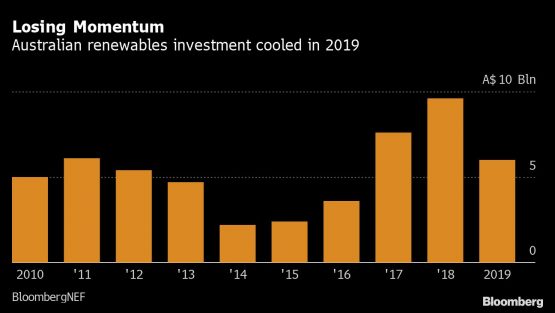 To solve the issue of bottlenecks, Fluence is touting “virtual transmission lines” that would integrate battery storage systems along the network, injecting or absorbing electricity as needed and regulating frequency and voltage. In a submission to the Australian Energy Market Operator, Fluence proposed installing two 250-megawatt facilities, which would eclipse the 150-megawatt battery at Hornsdale in South Australia, installed by Musk’s Tesla Inc. in 2017 and currently billed as the world’s largest.

“Think of it as being able to widen a highway instantaneously to accommodate surges in traffic,” Jaad Clifford-Bolt, senior business development manager at Fluence, said in an email. “That surge could be solar or wind output on either side of the interconnector that needs to be exported, or a sudden spike in demand on either side.”

Batteries also avoid the need to build the infrastructure required in “traditional poles and wires solutions,” he said.

“This lets you place them where they can provide the greatest value and relief for the network, whether that is at a solar farm, a substation or completely on its own at an advantageous connection point,” Clifford-Bolt said.

The sticking point for batteries until now has typically been the price tag, but that’s been cut in half since 2018, according to BloombergNEF. Fluence, which already operates a 30-megawatt battery storage system at Ballarat in Victoria state, declined to comment on the cost of its project.

Solar and wind facilities in Australia have tended to focus on areas with access to cheap land and a favourable weather profile, but these clusters are often in remote regions with limited grid access. Last year, AEMO was forced to curtail as much as 50% of the output of several facilities due to concerns they might compromise system stability.

A recent AEMO study found that the country could hit 75% renewables penetration by 2025, but would require enhancements to grid infrastructure “to capitalise on the geographic diversity of Australia’s renewable energy endowment.” The operator’s long-term plan for the network supports investment in new or upgraded transmission links, but it is also seeking “non-network options”, such as Fluence’s battery proposal, to assist the process.

Fluence is not the only company looking to scale up battery technology. France’s Neoen SA, which owns the Hornsdale facility, has submitted a proposal to install a 600-megawatt unit near Geelong in Victoria.

Battery cost is still the limiting factor for going fully off-grid, although the price of PV panels has dropped by over 60% in recent years. However, with many different makes of electric cars currently coming on-stream, battery prices are also bound to drop significantly as mass-production increases. I have heard that when an electric car battery needs replacing at about 10 years, it still retains some 80% of its capacity, so could then come on the second-hand market at a very affordable price.

Sometimes I just sits... 1 year ago

Second-hand electric car batteries are already available – even in RSA.

What is “ 30-megawatt battery storage system”??

Sometimes I just sits... 1 year ago

Batteries cannot be described as an “x” Megawatt battery. The capacity is always linked to a time, therefore a battery may be described as a 30 Megawatt/hour battery. This would imply that it stores enough energy when fully charged to allow 30 Megawatts to be drawn for 1 hour before it is exhausted, 15 megawatts for 2 hours, etc. In practice, this will never be the case, as the battery cannot be reliably completely exhausted, and it’s life is compromised by deep discharges anyway.

That is what I was hinting at. Besides the battery having a capacity in MWh, there is also a huge difference in system and cost on what the rate of discharge is. So a 2MW inverter on a 30MWh battery is very different animal than a 60MW inverter on 30MWh battery.

I am considering a large system for industrial site – about 5h of capacity on 500kVA power. Filled by 999kVA solar. It is expensive, but if figure that I will be paying R3.10/kWh next year and that the system will mean I can back 500kVA of loads on what is effectively a very big UPS – loadshed is not an issue.