Sky-high Faang stocks were never anything but screaming bargains 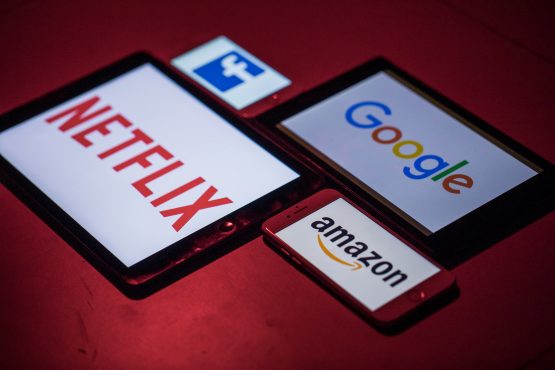 What explains the bull market’s ability to power on despite valuations that eclipse anything other than the dot-com bubble? Everything from passive investing to buybacks is trotted out to explain it, but the real reason is the uncanny predictability of corporate America’s earnings machine.

Patience is being rewarded like at no other time. Thanks to a climb in profits that is as steady as it is steep, valuations that once made noses bleed turn out to be very reasonable when measured against income one or two years later. Call it retrospective P/E — price divided by earnings that eventually come to pass.

The result has been a rally that, while paling next to the late 1990s in terms of hysteria, has caught up in terms of duration. Every year, bears get more convinced the stock market will crash due to its high valuation. And every year it doesn’t.

Case in point: the block of tech megacap companies known as the Faangs. Their tremendous ability to rapidly grow profits has defied Cassandras who said buying a Faang stock for more than 30 times earnings would haunt investors. Take Facebook Inc. in 2013, for instance. The stock looked gravely expensive one year after its debut, fetching a price-earnings ratio of 62 based on the income it generated in the previous 12 months. However, when measured against the profit that the social-media company made one year later, the stock cost only half as much.

Amazon.com Inc. showed a similar story. The internet giant was traded at roughly 183 times reported earnings back then. When judged by earnings that materialized five years out, it was cheap — for a multiple of 14.

Needless to say, that year was the onset of a 530% rally for the Faangs — Facebook, Apple Inc., Amazon, Microsoft Corp. and Google parent Alphabet Inc., an advance that easily dwarfs every major industry in the S&P 500. Original Faang member Netflix Inc. has gained more than 1,000% since then. Bubble warnings were again heard when the broader market began to rally off the 2020 pandemic lows. Yet corporate profits have roared higher in such a spectacular fashion that those valuations, when analyzed against the actual earnings reported a year later, were almost 20% cheaper than analysts thought.

Valuations are never great market-timing tools, yet they do matter in the long term since the more over-valued the market is, the lower its future returns. According to a study by Deutsche Bank AG, valuations similar to today’s have historically brought slightly negative returns on average in the ensuing five years.

To Binky Chadha, Deutsche Bank’s chief strategist, current stretched multiples reflect confusion over exactly where the market is in the earnings cycle. With S&P 500 firms exceeding analyst estimates by more than 15% for five quarters in a row, stocks are priced for a prolonged recovery and for large beats to continue, he says. Yet earnings are already 10% above the trend seen in past decades.

“With the current cycle advancing very quickly, the risk that the correction is hard is growing,” Chadha wrote in a client note.

Of course, there is no guarantee the great expectations embedded in share prices will come true, not even for the largest companies. While some of the Faangs just rode a resurgence in consumer and business spending to a quarter of record profits, Apple has warned that sales growth may be slowing amid a tight supply and Alphabet said it’s too early to forecast longer-term trends due to uncertainty over the pandemic.

Not to mention the heightened regulatory scrutiny these behemoths face. Apple shares dropped more than 3% Friday after the iPhone maker was ordered by a court to allow developers to steer consumers to outside payment methods for mobile apps.

Big tech bulls aren’t deterred. The Faang stocks have risen 8% this quarter, joining defensive shares like utilities as market leaders. While some say this is driven by desires for stable businesses amid heightened macro uncertainty, it’d be remiss to credit it all to a rush for safety.

Except for Amazon, the rest of the Faangs have all seen their earnings estimates rise, jumping an average 13% in the past three months. That compared with a 7.5% increase for the S&P 500.

Anyone who stared down the valuation warnings was proven right. The Faangs have added $8 trillion in share values since 2013, buttressed by an uninterrupted earnings expansion that endured the 2014-2015 oil shock and last year’s pandemic recession.

And analysts’ estimates suggest the Faang bloc’s superior earnings strength will keep going, expanding at an annualized rate of 23% in the next three to five years, double the S&P 500’s expected growth rate.

“Their business models appear to be almost bulletproof,” said Mike Mullaney, director of global market research at Boston Partners. “I’m more willing to pay up for that.”