Tesla shares wiped out about $109 billion off its valuation in the course of a single day after the electric vehicle maker’s fourth-quarter earnings and outlook failed to impress investors.

Shares of the Austin, Texas-based electric vehicle maker plunged nearly 12% on Thursday after an earnings call the previous day that was long on a humanoid robot called Optimus and short on new vehicles. The stock closed at $829 in New York, the lowest since October 14. The decline was the second biggest on the S&P 500 Index on Thursday. The last time Tesla erased more than $100 billion in market value in a single day was November 9. 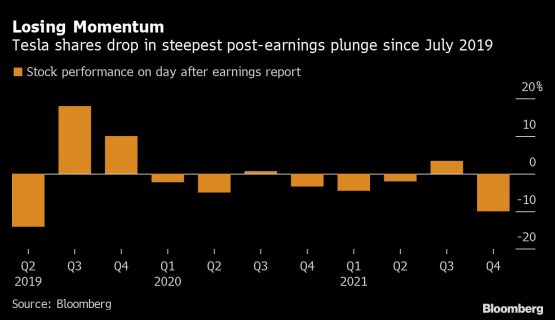 During Tesla’s fourth-quarter earnings call Wednesday, Chief Executive Officer Elon Musk said that the company would not bring any new vehicles to market this year. That was a letdown for many who assumed Musk’s promise of an “updated product road map” would include bullish news about the Cybertruck, Semi truck and plans for future, cheaper models.

“Tesla is clearly running out of momentum, and the lack of a launch of a low-budget car in the mid-$20 000 range really dampens the growth outlook as the competition tries to catch up,” said Edward Moya, senior market analyst at Oanda Corp.

During the call, a more broadly affordable, $25 000 version of Tesla’s mass-market Model 3 was dismissed as not being currently worked on, with greater emphasis placed on Tesla’s work around artificial intelligence and autonomy.

“In talking product pipeline, Musk pivoted from future vehicles (like the Roadster or <$25k Model 2) to robotaxis and humanoid robots,” wrote analyst Brian Johnson of Barclays in a note to clients. “While we recognise that robotaxis are a crucial part of the bulls’ ‘blue sky’ valuations for Tesla, we are concerned about the lack of a physical product pipeline.”

“We are also seeing inflation and rising commodity prices which we expect to continue to put pressure on our costs. How this specifically impacts gross margins is uncertain,” Kirkhorn said.

The gloom from Tesla’s results spread to other EV startups as well, with stocks including Rivian Automotive Inc., Lucid Group Inc. and Fisker Inc. all falling 10% or more. Thursday’s rout adds to an already troubled run for these companies, which have been heavily beaten down amid a wider selloff in technology and growth stocks due concerns about rising interest rates. These three stocks combined have lost over $13 billion in market capitalization.