The $160 billion boom in thematic funds is fizzling out fast as investors pull back from Wall Street’s most speculative bets.

The breed of exchange-traded fund targeting niche investment ideas from sports betting to artificial intelligence is on pace for its first month of outflows in more than a year, according to data compiled by Bloomberg.

Traders have pulled about $1.6 billion in May so far. While that’s only 1% of assets in the category, it’s a striking reversal from the start of the year when inflows peaked at $18 billion in January. The sector’s most popular funds are being hit hardest. The Ark Innovation ETF (ticker ARKK), the poster child of the thematic frenzy, has dropped more than a third from its February peak. Investors have withdrawn about $500 million in the past two weeks.

“For some of the more short term money, folks are exiting,” said Michael Arone, chief investment strategist for the US SPDR ETF business at State Street Global Advisors. “Investors are a bit anxious about the growth prospects for a lot of these companies and the valuations as interest rates rise.”

ARKK was falling for the 10th day out of 12 on Wednesday, now down 18% year-to-date. Tech shares once again led Wall Street declines on the back of the biggest inflation surge since 2009 last month.

Investors are adjusting portfolios and turning away from stocks most vulnerable to rising yields and prices. These include expensive-looking tech names, in particular those whose valuations are more reliant on hopes for future growth than current earnings.

The pain is particularly acute for the products at Ark Investment Management. Cathie Wood’s slate of funds, which led inflows in the boom with $8 billion added in January alone, have in total lost about $1.3 billion in May. 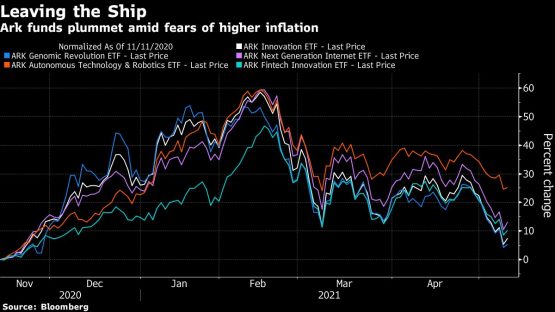 Clean-energy ETFs are also struggling after a record-breaking few months. Cybersecurity funds are suffering too, with the likes of Global X’s BUG ETF losing about $300 million in May even after a high-profile hack disrupted US fuel supplies.

Thematic ETFs now boast about $160 billion in assets, down from a peak of around $176 billion in February.

That’s still almost treble a year ago, however. For many, the trend of investing according to easy-to-understand narratives is likely to persist, even if the specific themes change.

“Although thematic funds have bled about $1.6 billion this month, it is relatively small compared to their aggregate size,” said James Pillow, managing director at Moors & Cabot Inc. “As long as we cling to narratives, there will always be thematic funds.” 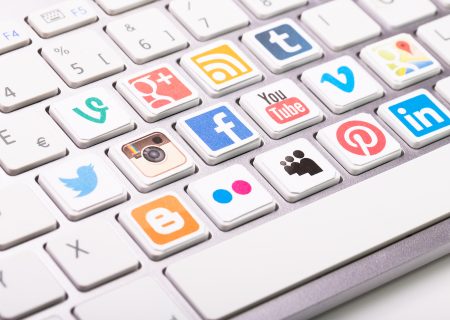