Many investors had thrown in the towel on Twitter even before it made a move unlike just about anything a US company had ever done before — permanently banishing the sitting president from its service.

The exile of Donald Trump led to a short-term dip that sent the shares below where they opened in the company’s trading debut in 2013. It triggered predictions of massive losses in users among the 74 million Americans who voted for Trump and the 88 million Twitter accounts that followed him.

Yet a funny thing happened on the road to oblivion: Twitter is now thriving in the stock market, up 33% so far this year. This week it notched its first share-price record since 2013, back when the social-media company was fresh off its initial public offering and a darling of investors thanks to fervent users and rapidly expanding revenue.

After years in the wilderness, Twitter is back in investors’ good graces thanks to product improvements and more aggressive content moderation that has helped the company return to steady user growth. Years of efforts to clean up the service and improve its advertising features appear to finally be paying off. It’s even outperforming peers like Snap Inc. and Pinterest Inc. so far this year. 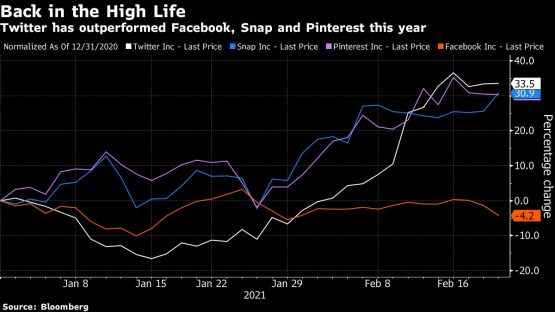 Improvements to the service have led to notable and consistent user growth, which was once the company’s biggest obstacle. Twitter eclipsed 20% growth in daily active users for five straight quarters and has projected it will do so again in the current quarter, even after it permanently banned Trump last month for his tweets surrounding the insurrection at the Capitol.

“There are good things ahead as far as sustaining user growth,” said Justin Patterson, an analyst with Keybanc Capital Markets, who raised his rating to the equivalent of buy last month. If Twitter can maintain user expansion at a similar rate and continue to improve monetisation, the stock is a relative bargain, he said.

Not long ago, Twitter suffered from product stumbles and issues with policing user behavior, which led to a reputation that the micro-blogging platform was fostering discord. Investors seeking social media exposure opted for Facebook’s more targeted ads and broader reach.

Still, despite at least three analyst upgrades so far this year, Wall Street enthusiasm toward Twitter remains relatively subdued. Of the 41 analysts tracked by Bloomberg that cover the company, less than a quarter recommend buying the stock. By contrast, nearly three-quarters of analysts covering Snap and Pinterest are bullish.

Twitter has always commanded a cult-like following among investors, many of whom are passionate users of its platform, and now there are reasons for them to be excited. The company says it’s improving its direct-response advertising products, which help advertisers drive direct sales instead of just build brand affinity. Twitter is also testing an audio chat product similar to the popular startup Clubhouse, which just raised money at a $1 billion valuation.

Wall Street will be looking for additional details on Twitter’s growth initiatives on Thursday when the company hosts its first analyst day since 2014. Chief Executive Officer Jack Dorsey and his management team are expected to lay out their plan to quicken the pace of revenue and user growth and potentially set longer-term margin targets, according to Colin Sebastian, an analyst with R.W. Baird & Co.

Twitter’s earnings report on February 9 was notable for more than just surging revenue and users. There was a change in tone from executives, according to Pivotal Research analyst Michael Levine.

“Both on the earnings call and analyst call back, we felt that management led with a swagger and a confidence we have not see in some time,” he said.