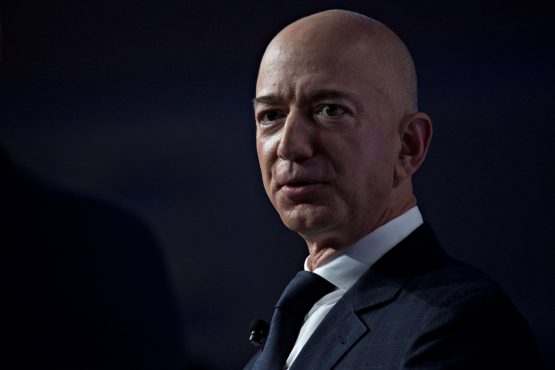 The world’s two richest men are duking it out before US regulators over celestial real estate for their satellite fleets.

Elon Musk’s SpaceX has asked the Federal Communications Commission for permission to operate Starlink communications satellites at a lower orbit than first planned.

Jeff Bezos’s Amazon.com says the move would risk interference and collisions with its planned Kuiper satellites, which like Starlink are designed to beam internet service from space.

A dispute that would normally be confined to regulatory filings is spilling into public view, in a spat that showcases the large personalities involved as billionaires chase dreams in the sky.

“It is SpaceX’s proposed changes that would hamstring competition among satellite systems,” Amazon tweeted Tuesday from its official news account. “It is clearly in SpaceX’s interest to smother competition in the cradle if they can, but it is certainly not in the public’s interest.”

The statement followed a tweet from Musk, the richest person according to data compiled by Bloomberg.

“It does not serve the public to hamstring Starlink today for an Amazon satellite system that is at best several years away from operation,” Musk said in a tweeted reply to coverage by CNBC journalist Michael Sheetz.

Musk’s Space Exploration Technologies Corp has launched more than 1 000 satellites for its Starlink internet service and is signing up early customers in the US, UK and Canada. Amazon last year won FCC permission for a fleet of 3 236 satellites and has yet to launch any.

Amazon earlier urged the FCC to reject SpaceX’s request for lower orbits. It said the change would put SpaceX satellites in the midst of the Kuiper System orbits, according to filings at the agency.

SpaceX pushed back in calls to the FCC, saying its plans wouldn’t increase interference for what it termed Amazon’s “still nascent plans.”

A lower orbit allows quicker internet service because the signal doesn’t travel as far. SpaceX told the FCC that having the satellites closer to Earth lessens the risk of space debris because they would fall out of orbit more quickly than higher spacecraft.

SpaceX eventually plans to operate some 12 000 satellites and has won FCC authorisation for about 4 400 birds, including 1 584 at 550 kilometres– where its satellites currently orbit. The company is seeking permission to stage another 2 824 satellites at the same approximate altitude, rather than twice as high as originally proposed.

“Amazon tweeted Tuesday from its official news account. “It is clearly in SpaceX’s interest to smother competition in the cradle if they can, but it is certainly not in the public’s interest.” ”

Yeah right Bezos…like you can be believed, you believe your statement

Musk has the advantage on this one (Space-X).

Where is the competition for space-X Mr. Bezos?