Charles Ellis wrote a timeless article in 1975, titled “The Loser’s Game”, explaining the dilemma of active money managers. It comes down to the fact that active money managers as a group will underperform the market over longer periods, because of the added costs that these professionals recoup from the investor when compared to broad passive index funds.

He used the analogy of amateur tennis, where players lose due to mistakes, rather than winning due to superior skill. Almost 40 years later, it is still an indictment on our industry that active money management, as a whole, does not exhibit skill and is a net cost to the end investor.

Some commentators have confused the fact that active managers in aggregate underperform the market with the misunderstanding that all active managers underperform. The average return of all active managers taken together is indeed below the market return, but within that average return one would find above-average and below-average trackrecords. Although it is a human condition for the majority of people to believe that they are above-average, the sobering reality of historical performance numbers indicates that it is only a small minority of active money managers who exhibit skill and outperform appropriate benchmarks over longer periods.

To further complicate things, active management is employed by people, in contrast to the rules-based application of passive indexing, and people have a tendency to move between employers, making it difficult to empirically prove my assertion that a minority of active managers (people) do exhibit skill and outperform the market indices. I will have to suffice by referral anecdotally to the likes of Warren Buffett, George Soros, Jim Rogers, Michael Steinhardt et cetera as examples of people who have exhibited the necessary skills to outperform the market.

How do these people do it? By avoiding major mistakes and playing the Winner’s Game well, inching out market-beating returns by coming to different conclusions than the majority. Buffett uses the analogy of Mister Market, and knowing when to differ from him on the estimation of value. Soros crafted the philosophy of reflexivity, recognising when an apparent market mispricing anomaly feeds upon itself to the extreme. Rogers is a true maverick at heart, he gathered as much factual information about an investment as possible and gained rare perspectives from extensive travelling. Steinhardt coined the term variant perception – knowing what the consensus view is and understanding how you differ from that view. They all had mental models which helped them think differently than the rest of the crowd.

A recent example locally was the case of African Bank Limited (ABL). Winning the Loser’s Game meant avoiding ABL shares and fixed-interest instruments altogether. Winning the Winner’s Game (i.e. not only avoiding the mistake of investing in ABL but actually employing the necessary skill to make money out of the situation) meant shorting the ABL shares or only buying the senior fixed-interest instruments below 90% of par. Many active money managers lost the set by having large long positions in ABL instruments and ultimately falling behind even further in performance terms. 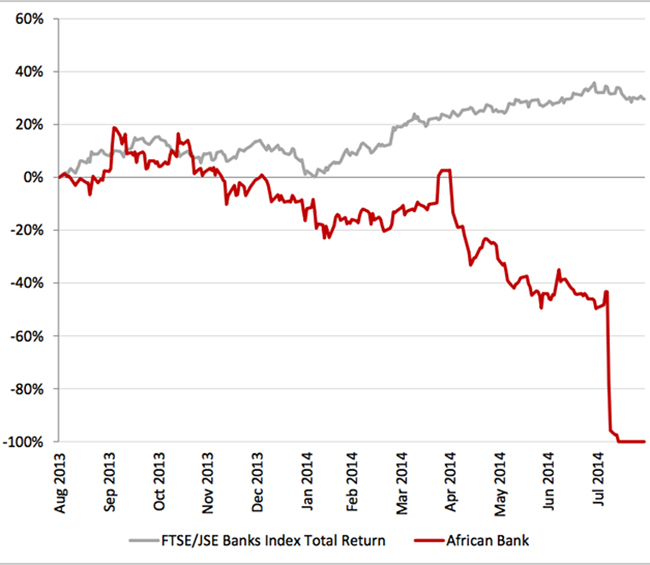 Professional money management entails making a string of investment decisions – what to buy, at what price, how many shares, when to hold on (do nothing) and ultimately at what price to sell. It might sound uncomplicated, but it definitely isn’t easy. You can see why the tennis analogy is appropriate.

The retail investor needs to decide whether they want to play the Loser’s Game, content with avoiding major mistakes by investing in passive index funds and generating a return similar to an appropriate benchmark. Alternatively, they should seek a money manager in the same way that a talent scout identifies a professional sports player with the rare skill to win the game more often than not. Very few who play the game are above-average.

Investment skill comes down to differentiated thinking. It requires you to analyse the same information that others are looking at, but coming to a different conclusion. It necessitates robust risk management to limit losses when you are wrong. It is associated with character traits such as scepticism, optimism, curiosity, independence of thought, humility and self-discipline. If you or your financial advisor can find a person with such traits, and with a demonstrable above-average investment track record, you have found a Winner of the Winner’s game.

This article was originally published in Glacier Research by Sanlam, and republished with permission.

Jean-Pierre is an analyst at 36One Asset Management.